I’ve had my new HTC Hero for about a month and I absolutely love android, and in the next few years almost everyone’s cell phone will be a “smartphone” – and android is set to take the lead over the iPhone with the number of android devices coming this year. With the app market transforming our phones into little computers, spy software has gotten more powerful, easier to install, and cheaper. And unlike the Windows Mobile and palm smartphones of previous years, todays smartphones are actually cool and fashionable for the average person. It has never been easier to pick up a Nexus One or Motorola Droid for your partner as a gift and turn it into a stealthy spy phone in just a few minutes.

I searched for all spying apps I could find that met 3 important requirements: hidden from both the app list and task managers, able to access the spy data online, and records at least text messages and phone call history.

SMS Box will forward and archive all your phone calls and text messages to a web database where it can be accessed. I tested this app out and it appeared to work as it says. A free version of this app is available, but it does not include the stealth feature. The paid version of this app does not show up in the app list and sells currently for 19.90 euros ($27.13). 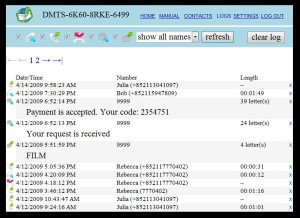 The first spy software to come out of the iPhone is Mobile Spy, and it now works on android phones along with a ton of other smartphones. Besides text message and call logging, mobile spy also records photos and videos taken with the phone, appointments, emails, and even logs GPS locations so you can track just exactly where that phone has been traveling to. Information is accessed remotely online and you can check out a demo of the interface on their website. A big advantage to mobile spy is that it also works on the iPhone, windows smartphones, and many other types of phones including blackberrys.

Update: We have recently reviewed MobiStealth and detailed exactly how to install it.

MobiStealth recently emerged as a solid competitor to Mobile Spy and shares many of the same features, but it has some more advanced features and comes in 3 different flavors of Lite, Pro, and Pro-X. The lite version is priced the same as Mobile Spy and has the same features except for photo/video logging. The Pro version is where it gets interesting – send a secret invisible text message to tell the phone to start recording the surrounding audio or retrieve the current GPS location, and the Pro-X version will record and upload phone call conversations for later listening.

After trying and reviewing all 3 spy apps on my phone I found each one to have it’s advantages. If you just want to spy on text messages and call history quickly and on the cheap, SMS Box via the app market is your best bet only costing $30 bucks. If you need additional spying features such as GPS to know where the phone is traveling and photo/video/email logging to monitor for anything suspicious, Mobile Spy is a better choice. Finally, if you need more advanced features like the ability to record phone conversations and remote text message control over the phone then MobiStealth is the superior choice.