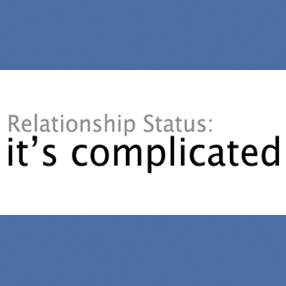 Facebook is an amazing website, with notable usefulness. You can use it to keep up with friends and acquaintances; you can rely on it as a personal networking tool. And of course… you can also take advantage of Facebook as a way to find new romantic interests! Sure, maybe the world’s largest social network was not exactly conceived as a dating platform. But truth of the matter, it does work like a charm to that effect. And let’s face it, if Facebook had not been intended for that kind of use, it wouldn’t include features such as “relationship status”. We all know this tidbit of information is prominent enough that it’s usually one of the first things you look at while visiting the profile of someone you know… or someone you’re planning to get to know. But what exactly does it mean when someone lists their relationship status as “It’s complicated”?

There are six options available, when picking your relationship status on Facebook: Single, in a relationship, engaged, married, in an open relationship, and… it’s complicated. While most of the other statuses are pretty much self-explanatory, the latter conveys a cryptic sense of mystery that you may want to reflect on. What exactly does it mean to point out relationship status as “It’s complicated”? Perhaps the person is trying to say they’re in a sort of relationship, or maybe they wish they were in a relationship with someone that doesn’t happen to reciprocate their affection? Does it mean they’re seeing someone but only casually, with no actual commitment going on? Are they affectionate towards an inanimate object or member of another species? Truth of the matter, it could mean any of those things…  and many other possible (or implausible) scenarios. When people choose this relationship status on their Facebook stage, it indicates they are not exactly available, but they’re not exactly committed. Kind of like the proverbial glass that’s half-full or half-empty, depending on how you look at it. If you’re looking to use Facebook to court someone, you can – and should – think of the “complicated status” as a key point to your advantage, whenever you see it displayed on the profile of someone you’re fancy of.

Learning how to use “it’s complicated”  to your advantage.

Maybe it’s not immediately obvious to you, but when someone chooses this term to describe their current relationship, that is actually good news for any potential romantic interests. And yes, that includes you… provided you play your cards right. Because “it’s complicated” indicates doubt and confusion coupled with an obvious insecurity and longing. It shows that person actually would like to be in a relationship, but for some reason it’s just not working out for them. When you realize that someone thinks of their relationship status as being messy… it actually opens up a world of opportunities, as far as the romantic game goes. For once, it’s a clear sign indicating that person could be receptive to potential romantic interests – such as you. If that person is defining their relationship status as “complicated”, it means you can be the simple and affectionate person that will barge into their lives and clear all their insecurities and satisfy their emotional needs. Can you do that? Let’s see how.

When you really want to know what the person means with “it’s complicated”, you should just ask. That can be a great conversation starter, actually! You get to show that you care while engaging in personal conversation and expressing a willingness to be supportive; besides, talking about romance is often one of the best ways to get into romance. In case you don’t really know the object of your affection personally, there’s a good chance they’ll evade your question, or just refuse to provide a straight answer. That’s why you should be looking for some clues between the lines: in their actual profiles. In this day and age, you should always spend some time investigating the on-line activities of a person you have feelings for. Doing so, you’ll get a sense of what that person is all about, plus it will make it easier for you to think of interesting conversation topics, when the time for bonding comes. Keep this in mind when someone claims their relationship status is “complicated”, you can usually work it to your advantage. Take your time, do your research and look for an opening that you can base your subsequent seduction attempt. Make it fool-proof and prove that person that “it’s complicated” just doesn’t suit them.